The following Beginner's Guide for Elite: Dangerous was written by Raging Teapot on their blog. 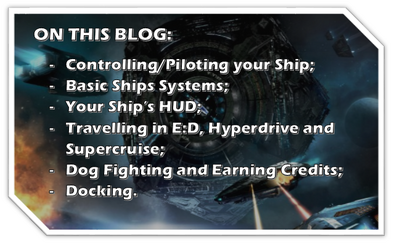 So once you have downloaded the installer, fire it up and login, you should have registered at some point, I registered when I purchased the £100 Premium Beta. I was tempted to get the £200ish Alpha but my fanboy status doesn't extend to that value. You'll get a e-mail from Frontier with a security code that you'll need to enter before the download kicks off.

Once the game is installed the launcher Install button will change to Play, click Play and off we go. Hold your breath whilst the splash screen passes leading you to the main menu.

From here you have a few options, if this is the first time your firing up the game then you should probably start with a single player mission so you can setup your control preferences and generally get used to controlling your ship before you enter multiplayer (where a more 'dangerous' player may turn you into frozen space mince).

The first mission in Premium Beta is basically blowing up space canisters, as you complete each mission another will be unlocked for you. Remember you have limited ammo in the first mission so don't blow it all on one canister, although ironically if you do you could just fly your Sidewinder into the canisters at high speed which equally obliterates them, not sure if that equals a mission pass since I never actually completed any single player missions, I was to eager to head out into the galaxy with other commanders.

Controls or lack there of...

If your initial reaction to controlling your ship is that you might have just wasted 100 quid (bucks) on the premise you'll never last long enough to turn a profit thereby having a considerably poor gaming experience at the hands of greedy NPC pirates and just plain nasty ego deprived human players (more of which I'll explain later), never fear, your probably just used to up being down and down being up, i.e. inverted control systems.

The default control configuration for E:D is that when you push the mouse forward your ship will pitch back (nose up) and therefore your ship will roll forward (nose down) when you pull the mouse back. For many of us we are used to flying both terrestrial and cosmic vehicles with the axis inverted so when we pull back on the mouse our ship equally pitches back and therefore we fly 'up' and vice versa when you move your mouse forward (although technically in space there is no up or down).

If like me you don't know your Pitch from your Yaw here's a handy little diagram I dug out from Wikipedia: 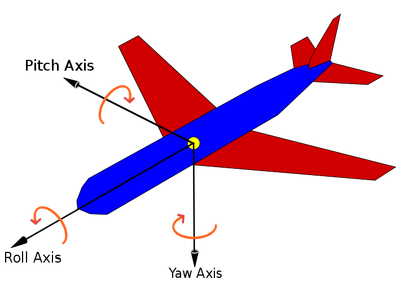 Are we mice or men?

For I soon realised that flying anything in E:D is gonna need more then the mouse I use to burn holes in my wallet on Steam. Never been a big joystick fan but then I figured after a few intercepted journeys by space pirates (Pirates 6 - Me 0) I probably need to find a better way of piloting my ship to at least win one NPC pirate engagement, let alone any PVP encounters (which I had yet to witness).

When your in the midst of heated battle the last thing you want to worry about is how to control your velocity with the keyboard whilst pitching up behind an enemy with your mouse, by having the majority of core controls on a single device like a joystick you don't have to flutter between your mouse and keyboard. There are so many controls, as with most sims, that you won't be able to get them all on the joystick but by having the key controls mapped it will make you a more agile pilot. I didn't play much with the keyboard and mouse but what I did play I got annihilated every time, since I got a joystick I typically win out every dog fight, and I'll explain how as we move through this guide.

A joystick isn't essential but it sure as hell helps with blowing stuff up and especially docking, which we'll come to later.

So here is the joystick I specifically purchased for E:D, the Logitech Extreme 3D Pro: 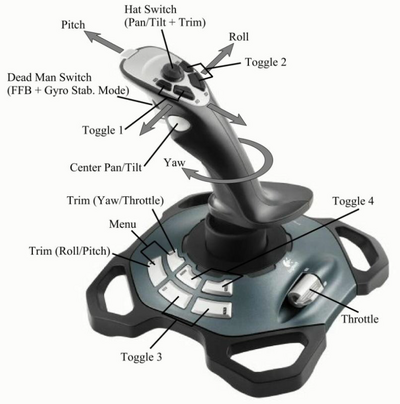 For straight up dog fights against other Sidewinders or Cobra type ships using Yaw, Pitch and Roll will usually keep you on top of things. In the Premium Beta you'll also see larger ships, such as Federation Anaconda's, these ships are bigger and from what I can make out have full 360 degree turrets, I got caught out alone with one of these bad boys and was dead before I could create enough distance to jump out of the fight. BUT, they have a blind spot, sometimes it's easy to stay in the blind spot and other times, not so much.

The blind spot is directly behind the ship, so your facing it's thrusters, if it's trying to escape then you can be pretty sure it'll just head in a straight line while it tries to re-route energy to it's engines and get the hell out of there. However, if she's banking all over the place then you need to be using your Hat Switch (on top of most joysticks) to control your vertical and horizontal thrust, if you've ever played Counter Strike or any other FPS this is basically strafing left, right, up or down, this allows you to keep your cross hairs on the target while keeping in the Anaconda's blind spot - in most cases the Anaconda will simply jump when in serious trouble.

Right, so your next question is probably going to be, how do I configure my joystick. Well, I knew you would ask so I dug out the guide from the E:D forums that helped me, it's designed for the Logitech Extreme 3D Pro but the concepts apply to any joystick, use the image of the stick in this post combined with the following guide to get your own joystick working:

Joystick Configuration for E:D Many thanks to Zieman for this.

One final thing on controls, make sure you have your target buttons setup, it's best to use the buttons nearest your fire trigger, especially map Hostile Target and Cycle Enemies (they might be called something else but you'll figure it out).

There are some key concepts in E:D you need to be aware of, this is a basic guide so I'm only going to cover the high level stuff, I'll probably write more blogs as I figure stuff out.

But anyway, here's a picture of our cockpit and what the different controls mean: 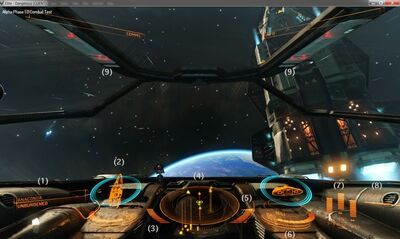 1. This is your current destination lock, this is an Alpha screen so it's changed a bit since then, usually this will be populated by your celestial target such as a planet, star, base or place of interest, such as a High Conflict Zone; 2. This is your current target halo, notice the blue rings around the halo and also the bar below the target, the rings indicate the targets shields and bar at the button is the targets hull strength; 3. This is your internal temperature gauge, if it maxes out basically your ship blows up. One thing that will destroy your ship is trying to jump with hyperdrive or superdrive (needs revising) without throttling up, which is what activates the jump sequence (more on that shortly); 4. This is your average targeting radar, objects with the line trailing them (going down) means they are above you where as in the opposite direction they are behind you, use the single player missions to get used to this; 5. This is your throttle, see that little blue indicator on the throttle? Well that's your turning sweet spot, when your in a dogfight and you need to do some tight banking or turning moves, make sure your throttle is in the blue and you'll turn at least 50% more effectively - this is reallllllyyyyyyy important for battles. Thanks to Xzanron for this image on the forums. The "What is this?" part indicates the available power/throttle range. Can't push the throttle further than the length of that line - thanks to RCKJD (and Robbie) for that:

6. This is your ships shields and hull status, keep an eye on this during battle, when you start out in a basic Sidewinder and lose your shields, you'll be dead pretty soon so you might want to consider a quick exit. Your shields will change red from the outside circle in, when all circles are red your shields are gone and now your hull is getting beaten into oblivion, your shields will recharge depending on how much energy you have allocated them, but they will NOT recharge when your ship is taking fire; 7. This is your capacitor or power allocation, SYS is basically shields, ENG is your engine and WEP is your weapons. I kept the default setting for controlling these, which is the keyboard. Left Arrow key is allocate power to shields, Up Arrow is Engines and Right Arrow is Weapons. If you've taken a beaten and your shields are low or gone then divert full power to the shields, if you took a dogfight several kilometers from your desired position give full power to Engines and use Thrust/Turbo to obtain short increases in speed and if your feeling pretty safe in the blind spot of an Anaconda give full power to weapons and keep pounding her with your lasers (no pun intended). 8. This is your signature, i.e. how loud you are, fully powered up your ship can be targeted and will show up nicely on enemy radar. As I understand it you can go into Silent Running mode which means your signature is reduced and I assume you can no longer be targeted, if this is not the case then I'm not sure what the point of Silent Running would be. Worth noting that when your in silent running mode your temperate increases, so should keep an eye on this unless you want to end up a commander toastie. 9. Alarms for when something bad is about to happen, i.e. crash into a star.